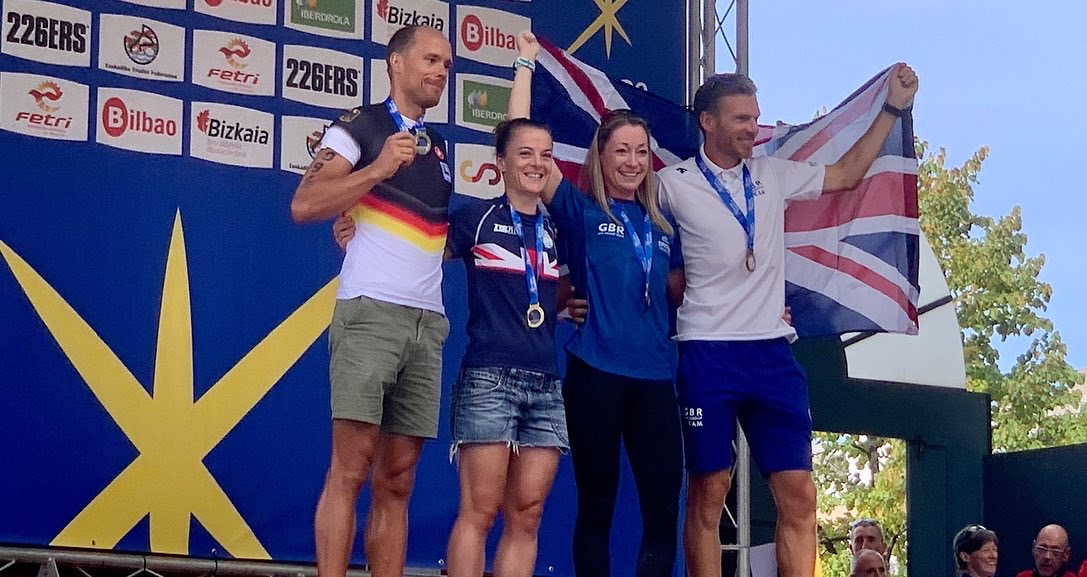 Mark Cavendish, Bradley Wiggins, Fred Wright, have the ability to take us inside the peloton. Making us feel as though were in the action with them. Sadly, not every athlete has this gift.

Having recently won the European Duathlon Championships, Hayley left some fantastic notes in Training Peaks. It’s a joy to read that I wanted to share. The following excerpt is lifted straight from TP. Enjoy.

I was a bit wary about flying off. I’m aware that this is not a 5km time trial so went a bit conservative at the start. A girl shot off on the start-line and I had your comments in my head about pointy elbows and being clear at the start.

I stuck to the first 2-3 people and tracked them easily, so overtook as I knew my legs felt good. I concentrated on my own pace and moving through and past some of the people on their second lap from the earlier men’s start. I passed one F40 girl and could hear her breathing heavy behind me so I knew she wasn’t going to keep up.

I noted her name and we had a good tussle on the bike later on. She came 2nd in our age-group (AG). T1 was okay – a long way, but I had a good monument right by my racked bike so spotted it ok. I ran in my bike shoes – next year I need to practice the elastic band thing. I got a bit stalled behind a few people slowing down over a bridge out of T1 (the pictures show me clearly looking a bit frustrated!), I really wanted to get going. I saw my girls and John Dargie (who had saved me from a mechanical the day before!) cheering at this point on the bridge.

So, onto the bike and all good, until I felt a bit of discomfort and a nip under my left hamstring – you know where I used to get issues? I probably got a bit focused on this for 2-3 mins. I could definitely feel it and I think this made me go a little cautious just as we hit the first climb and the steepest part. I was going past a lot of people all the same.

There was one Italian woman in the 55+ AG and she went past me and I tried to stay with her wheel. She was amazing and off she went (clearly rides the Dolomites every day). I shook her hand at the finish line as she’d finished top 5. Unreal riding.

Anyway, I started to loosen and not notice the hamstring and just wanted to focus on my own ride and getting the watts down and cadence up. I was moving pretty efficiently through the field and I was so glad of my bike skills at this point as some folk seemed to be struggling and had a really low cadence. The tarmac was good. I have to say I had an angel sent to me about 1.5miles from the top of the climb.

A cyclist, not in the race, powered past me on a beautiful Bianchi. He had those lithe looking ex-pro legs. Anyway, I took a split-second decision to see if I could hold his wheel and I did. I dropped back at times, but when I got to the turn point, he turned to me as he headed onwards and gave me a nod and a wave. It was a pretty cool moment and maybe worth a few free watts up the hill. It was a drafting race after all. Yes, never stopped pedalling down the descent – it needed work to maximise catching anyone I could. I caught a few groups on the downhill and just wanted to hammer it to make the most of this easier section.

So just as I hit the lower parts, I thought I better take a mouthful of gel for the run. I was really worried about having stomach problems or a stitch so I literally sipped and had a mouthful of gel. This is where the 2nd placed girl caught me. I was pretty surprised!! I’d forgotten all about her and was in my own race bubble. I thought okay let’s work together, but then changed my mind and shot off and tried to drop her to see what she was made of. She came back at me and I thought let’s not waste energy on that – burning matches and all.

I let her stay within a few metres of me as we twisted and turned back through Bilbao. At the bridge I got my feet out of shoes. It was a short steep descent to the dismount line. I pedalled fast and could see the other AG girls bunching up and 2-3 others hitting the line dismounting. I did a proper rolling dismount at speed. I had forgotten about the kerb someone mentioned the day before. My bike clipped the kerb and a pedal hit my ankle hard – pedal on ankle bone. It hurt, but I couldn’t show it.

A competitor asked if I was okay in transition as she’d heard or seen it. I carried on, trying to stay focused and get through T2. I took my time to fix my shoe in T2 as I could feel my ankle starting to swell. The other girl in my AG ran past once then twice looking for her racking spot. There’s a little bit of killer instinct in that moment where you think ‘that’s got me 10 seconds, make the most of it’.

I took it easy out of T2. I knew to settle in, breathe and get my rhythm. My ankle was definitely swelling, but I’ve had worse. I used to play football so I know what it’s liked to run after being kicked. I could see a couple of people ahead and focused on getting closer to them. I focused on closing the gap – keeping the focus external,
not on my ankle.

I saw my girls with 1 mile to go right outside the Guggenheim. We high fived and it was just the boost I needed. I couldn’t feel my ankle now. I couldn’t sense anyone immediately behind me, but was ready for a sprint if required. I wasn’t going to give up easily.

I had no idea what place I was in, but knew every place mattered. I had one last look on the bridge before the finish chute and didn’t see anyone on my shoulder. Phew, what a relief it was to get round and finish. I wasn’t sure of time or placings. It was just so nice to speak to people, shake hands and celebrate an amazing course and race. It was later in the park just after the finish when Cathy found the timing page and we completely didn’t believe it when my name was first in AG.

I honestly have never thought of winning. I knew how competitive British Champs was last year at Oulton Park. I’m still a little surprised, but mostly completely enthused and want to do more!

Thank you so much for all your help and advice. Onwards and upwards.